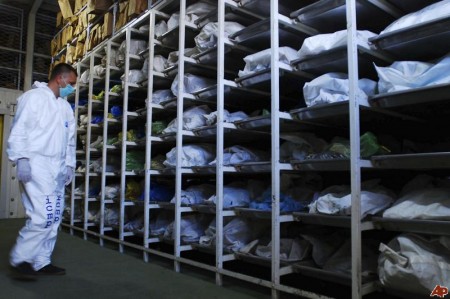 613 newly-identified bodies excavated from the mass graves have been laid to rest at the cemetery in Potocari offering closure to the families of relatives. The identification of remains is carried out by ICMP , International Commission on Missing Persons, a most impressive organization.

During the four years I spent in Bosnia, it was my visit to Tuzla, to the ICMP laboratory where the bodies unearthed from the mass graves around Srebrenica are indentified through DNA identity test that marked me in the most profound way. More than the graveyards and the wailing widows, more than the desolation of Srebrenica or the burned down Sarajevo Library.

Because of the clinical stillness of death that stares you in the face. Without words. Without feelings.

The place is stark, gutted of all emotion.

A cold room is filled with orderly shelves.

And on these the shelves white plastic bags neatly stacked.

And a very specific odour.

The smell of death.

In July 1995 Serb troops under General Mladic overran Srebrenica, a UN declared safe haven, with the Dutch battalion in charge of civilian protection. The Serbs went on a rampage murdering some 8000 Moslem boys and men while the poorly armed Dutch withdrew.

The masterminds of the genocide Serb general Ratko Mladic and his political chief Radovan Karadzic are currently in the Hague facing trial. Both deny charges.