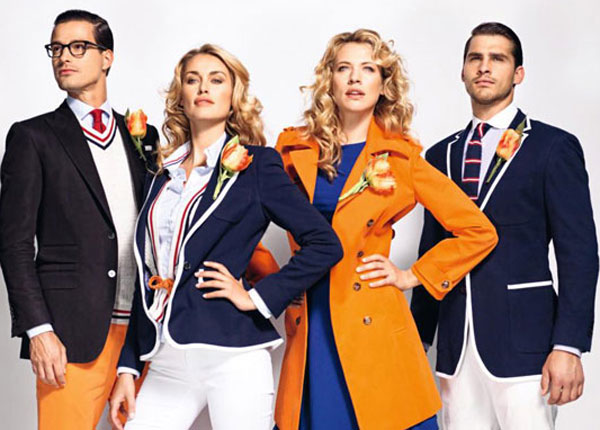 In the company of the fashion heavy weights like Ralph Lauren and Giorgio Armani  who designed for their respective country teams for the London Olympics 2012, the Dutch label Suit Supply is a novice.

But it is the Suit Supply that created official uniforms  for the Dutch squad and judging by the styles we saw yesterday at the opening ceremony they got it right. The colour palette is patriotic but not overbearing; the lines are crisp and elegant, and the blue dresses under orange trenches for the female athletes looked chic and classy.

Given that Ralph-Lauren designed American uniforms made in China sparked huge controversy, and the Spanish team in an effort to save money decided to accept theirs from Russian designer Bosco for free who also supplied uniforms for the Russian and the Ukranian team, the Dutch fared well spotting their  preppy uniforms with an XL tulip on the lapel.

As for controversy, Suit Supply is more known for its racy ad campaign featuring well-dressed men in some naughty situations than problems with manufacturing ethics. According to company’s official website: “Suitsupply is committed to doing business in a sustainable manner. That’s why we only work with workshops that meet the internationally recognised standards of the International Labour Organisation. Suitsupply is also a member of the Fair Wear Foundation (FWF) which promotes good working conditions in clothing factories.” So racy can be ethical and fair. And when called upon — patriotic.