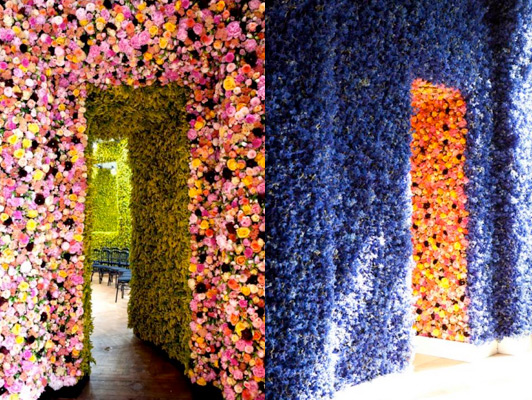 Haute couture is known for exuberance and drama. And while this first Raf Simon’s collection for Dior was thoughtfully restrained paying homage to the legacy of Monsieur Dior, the set was a kaleiodoscopic feast of flowers.

Before the show even started the select public in attendance as well as the world wide audience poised before their computer screens (the show was lived-streamed) were simply awed by such impressive display.

As Dior official site reports: It was a Jardin Couture with peonies, goldenrod, dahlias, carnations, delphiniums, orchids and all kinds of roses. Flowers from floor to ceiling — an event into itself. Well deserving a special film on the making of: